Costa-Gavras is a Greek–French film director and producer, famous for his political movies, and especially his thriller Z, as well as for some interesting comedies. He has received a number of awards, among which the Cannes Film Festival Best Director Award, the Academy Award for Best Adapted Screenplay, as well as the London Film Critics’ Circle Award for Director and Screenwriter of the Year.

Personal Quotes
I made Z (1969), first, because I am Greek-born. Secondly, because I felt I would like to do something. Some people sign petitions, others go to the streets – I do something as a filmmaker.
The best way to become completely crazy is to say, ‘Okay we’ll do a movie to change society’.
To make an American film is the dream of every European filmmaker 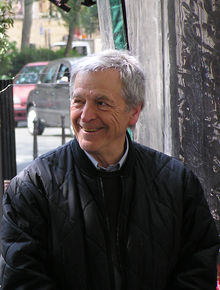 Costa-Gavras in April 2008, during the filming of Eden in West